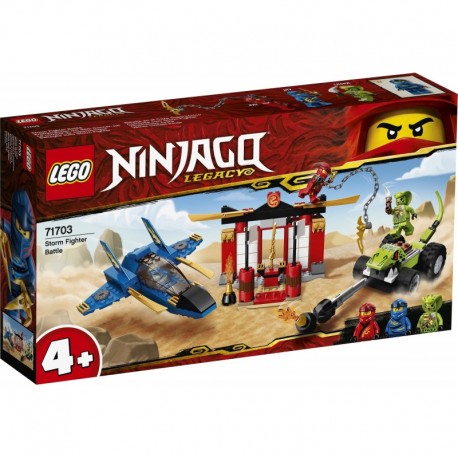 Join forces with Kai and Jay in a thrilling battle against the evil Lasha, a fearsome scout for the Venomari snake tribe. Climb high into the sky in the super-fast jet as you chase Lasha in his snake car on the ground below, but beware of the cars shooter! Can the daring ninjas triumph in this breathtaking battle and bring the dangerous Lasha to justice?

Kids can recreate thrilling scenes from early seasons of the Masters of Spinjitzu TV series with this updated LEGO NINJAGO Legacy set. Storm Fighter Battle (71703) features 3 minifigures, a toy jet, a toy car and a NINJAGO temple with a jail. This ninja battle set will provide imaginative kids with hours of creative fun. Welcome to 4+! LEGO NINJAGO 4+ toys help preschool kids learn to build their favorite characters, vehicles and buildings. With Starter Brick bases to make the process simpler, these sets are specially designed so first-time builders can experience the pride of constructing all on their own. The perfect building sets for kids LEGO NINJAGO ninja toys give youngsters a gateway into a fantasy world where they can indulge in creative fun and role-play stories with NINJAGO action figures. Your little ninja will be captivated as they play with a range of ninja toys, including ninja jets, mechs and dragons.

• LEGO NINJAGO Legacy set featuring Kai and Jay from classic early seasons of the TV series for exciting adventures against Lasha. This NINJAGO battle pack is perfect for helping preschool kids develop and improve their building skills.
• This fun toy has Starter Brick bases to help little ninjas learn to build and create their own NINJAGO adventures with minifigures of Kai, Jay, Lasha, a toy car, toy jet and a temple with a jail attached.
• This Storm Fighter Battle NINJAGO Legacy set features a cool ninja jet with folding wings and a toy car with shooter for ninja fans to stage exciting battle scenes from the NINJAGO Masters of Spinjitzu TV series.
• This 165-piece NINJAGO battle set with buildable figures offers a fun building experience for preschoolers aged 4+, and makes a highly desirable birthday present or holiday gift for passionate ninja fans.
• New for June 2020, this ninja toy is an eagerly anticipated update from classic seasons of the NINJAGO TV series. The temple measures 4 (10cm) high, 5 (13cm) long and 8 (20cm) wide the perfect size to play with anywhere.
• This Building toy for kids requires no batteries its ready to go. The NINJAGO battle pack is controlled only by kids imaginations, so the ninjas never need to call a ceasefire.
• The perfect fun toy to help preschoolers learn to build. Easy-to-follow building instructions are included to help bring this NINJAGO battle set to life and start NINJAGO brick adventures.
• LEGO 4+ building sets for kids introduce them to a wide universe of their movie favorites, TV characters and everyday heroes, helping them to understand the purpose of building steps and boosting their confidence.
• LEGO building bricks have met the highest industry standards since 1958. They are consistent, compatible and pull apart with ease every time.
• These LEGO bricks and pieces have been rigorously tested and meet the highest global safety and quality standards, both here on Earth and in NINJAGO city!