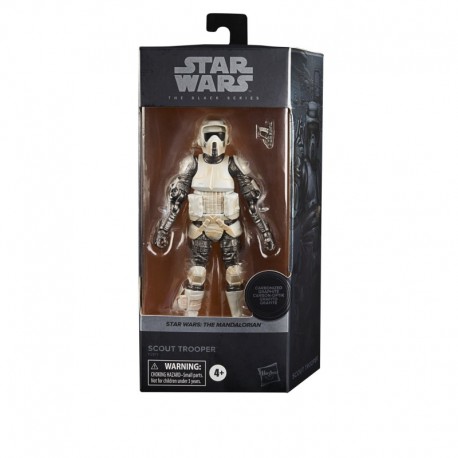 The Empire used scout troopers for a range of missions, including reconnaissance and infiltration.

Kids and collectors alike can imagine the biggest battles and missions in the Star Wars saga with figures from Star Wars The Black Series! With exquisite features and decoration, this series embodies the quality and realism that Star Wars devotees love. Star Wars The Black Series includes figures, vehicles, and roleplay items from the 40-plus-year legacy of the Star Wars Galaxy, including comics, movies, and animated series. (Additional products each sold separately. Subject to availability.)

The 6-inch-scale Carbonized Collection Scout Trooper figure is carefully detailed to look like the character from the live-action streaming series The Mandalorian on Disney+, featuring premium detail, multiple points of articulation, and a metallic finish.

• Scout troopers were trained for more independence and adaptability than most Imperial troops. The Empire used scout troopers for a range of missions, including reconnaissance and infiltration
• Fans and collectors can imagine scenes from the Star Wars Galaxy with this premium Scout Trooper toy, inspired by the live-action series The Mandalorian on Disney+
• The Star Wars The Black Series Carbonized Collection is treated with a sleek metallic finish for a premium figure that really stands out in any Star Wars fan’s collection
• This Star Wars The Black Series action figure comes with a detachable entertainment-inspired blaster accessory that makes a great addition to any Star Wars collection
• Star Wars fans and collectors can display this fully articulated figure featuring poseable head, arms, and legs, as well as premium deco, in their action figure and vehicle collection