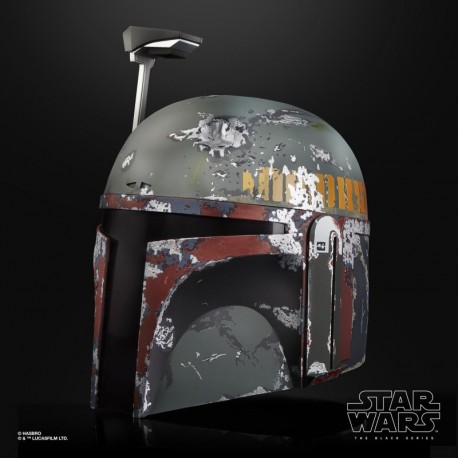 Commemorate Star Wars: The Empire Strikes Back with The Black Series Boba Fett Premium Electronic Helmet! This roleplay item with premium deco, realistic detail, and movie-inspired design is a great addition to any Star Wars fans collection. Featuring a flip-down viewfinder with flashing LED lights and an illuminated rangefinder HUD, fans can imagine what it was like for the famous bounty hunter to suit up for galactic action!Star Wars products are produced by Hasbro under license from Lucasfilm Ltd. Hasbro and all related terms are trademarks of Hasbro.

BOBA FETT: With his customized Mandalorian armor, deadly weaponry, and silent demeanor, Boba Fett was one of the most feared bounty hunters in the galaxyPREMIUM ELECTRONIC HELMET: Featuring highly-detailed deco, movie-inspired design, interior padding, adjustable fit, and electronic lights, this full-scale Boba Fett helmet is an iconic addition to any Star Wars fans collectionVIEWFINDER WITH ILLUMINATED RANGEFINDER HUD: With the press of a button the viewfinder drops down, activating 2 red LEDs that flash in a hunting pattern as well as a white LED-illuminated rangefinder HUDSTAR WARS: THE EMPIRE STRIKES BACK: Commemorate Star Wars: The Empire Strikes Back with The Black Series Boba Fett Premium Electronic HelmetLOOK FOR OTHER FIGURES FROM A GALAXY FAR, FAR AWAY: Look for movie- and entertainment-inspired Star Wars The Black Series roleplay items to build a Star Wars galaxy (Each sold separately. Subject to availability)