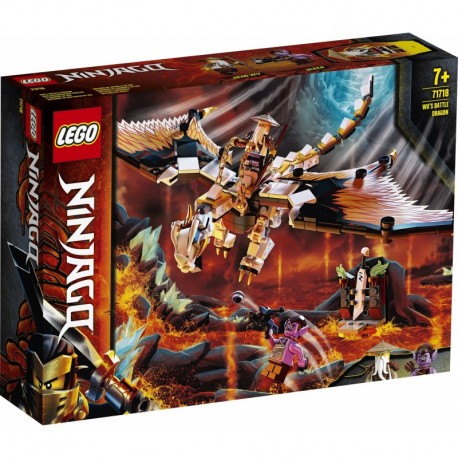 Item: 71718 Age: 7+ Pieces: 321Dragon building kit with 2 minifigures for NINJAGO action!Let kids stage thrilling battles between Hero Wu and his dragon and the troublesome Gleck, deep down in the Dungeons of Shintaro.

Fly Hero Wu on his brave dragon into action-packed battles inside the Dungeons of Shintaro! Place Hero Wu on top of the dragon and soar into battle as you compete with the fearsome Gleck for the prized Ivory Blade of Deliverance. Watch out as Gleck takes aim at you with his crossbow! It is essential that Hero Wu triumphs to help secure his escape from this scary underground world!

This LEGO NINJAGO Wus Battle Dragon (71718) building set for kids with 2 minifigures will be adored by fans of ninja toys, who can use it to stage their own fantasy stories from the NINJAGO TV series. The awesome posable dragon can move its wings, tail, feet and head. The best dragon building kit With 2 buildable figures of Hero Wu and Gleck, ninja fans can immerse themselves in the mysterious Dungeons of Shintaro and play out battles between themselves for the Ivory Blade of Deliverance. Wu can ride his flying dragon, which will enchant youngsters creative minds. The ultimate ninja playsets LEGO NINJAGO building toys for kids let them learn about the honorable values of ninjas as they venture into a world of mystery where they can role-play their heroes battling powerful dark forces. NINJAGO fans will be gripped for hours by these fun toys, which include dragons, cars and mechs in the different playsets.

• Awesome LEGO NINJAGO Wus Battle Dragon (71718) toy and 2 minifigures to recreate action from the NINJAGO TV series. The ideal gift for NINJAGO fans or kids who enjoy plotting their own dragon adventures with fun toys.
• This dragon playset includes a Battle Dragon and 2 minifigures: Hero Wu and Gleck, and the Ivory Blade of Deliverance. Kids can stage fun stories of their own to see which of these characters triumphs!
• This wonderfully detailed Battle Dragon has a posable head, legs, wings and tail and is designed for the Hero Wu minifigure to ride. Gleck is armed with a crossbow to fire studs.
• This 321-piece LEGO dragon building kit provides an exciting and rewarding build for boys and girls aged 7+ and makes a great birthday present or LEGO gift for any occasion.
• New for June 2020, this NINJAGO dragon set is a great size to play with at home or to take out for adventures on the go. The flying dragon measures over 4 (12cm) high, 9 (24cm) long and 13 (33cm) wide.
• No batteries are required for this dragon building set it is ready to head into the sky, powered solely by your childs imagination, for hours of creative play.
• This is the perfect LEGO gift for a young builder. The bricks and buildable figures come with easy-to-follow instructions so kids will quickly have the dragon ready for adventures.
• LEGO NINJAGO building toys for kids let them learn the honorable values of the ninjas and enjoy active play as they lose themselves in an exciting world of adventure.
• The LEGO bricks used to build this playset have met the highest industry standards, ensuring they are always consistent, compatible and pull apart with ease every time.
• The LEGO building bricks in this dragon building kit have been relentlessly tested and meet the highest global safety and quality standards. You know you are in safe hands with LEGO fun toys.