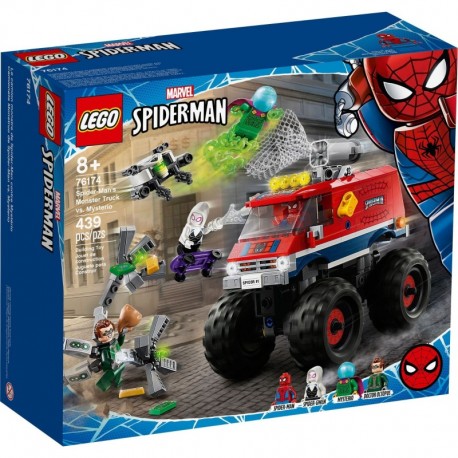 Item: 76174
Age: 8+
Pieces: 439Iconic Marvel characters and a Spider-Man monster truck
Epic superhero battles with 4 iconic Marvel characters and a monster truck with big tires, working suspension and a roof-top net launcher.Team up with Spider-Man and Spider-Gwen in an epic battle against Doctor Octopus and Mysterio. Doctor Octopus uses his long arms to steal some money. Spider-Gwen chases him on her skateboard and shoots webs at the villain. Spider-Man charges into the action in his monster truck. Mysterio attacks with 2 armed drones. Fire the net-launcher! Will that stop the bad guys? Only you can decide!

With 4 iconic Marvel characters and an awesome monster truck, LEGO Marvel Spider-Man: Spider-Man's Monster Truck vs. Mysterio (76174) is a stand-out gift that will delight any young superhero. A unique mix of superhero action Kids who are into superheroes and super-vehicles will love this LEGO Marvel mega-set. With classic characters Spider-Man, Spider-Gwen, Doctor Octopus and Mysterio, and featuring a big, tough monster truck with working suspension and a net launcher, plus 2 armed drones