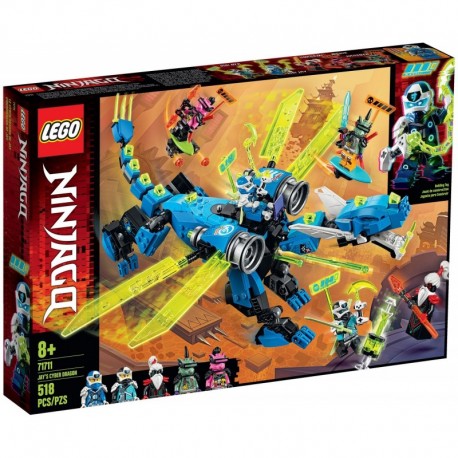 Stunningly designed LEGO® NINJAGO® Dragon toy for kids and 5 minifigures to stage thrilling action from Prime Empire. The perfect gift for dedicated fans of NINJAGO or kids with adventurous and creative minds.

This LEGO® NINJAGO® Jay’s Cyber Dragon (71711) buildable toy with 5 minifigures will be adored by fans of ninja mechs, who can use it to create their own action-packed fantasy stories from Prime Empire. This stunning LEGO dragon is highly posable and fires missiles from its spring-loaded shooters. The best dragon toys With 5 buildable figures of NINJAGO® Digi Jay, Digi Nya, Unagami, Richie and Hausner, ninja fans can dive in the video game world of Prime Empire and play out battles for the yellow Key-Tana. The two ninjas can ride in the cockpit of the awesome Dragon Mech, which will grip youngsters’ imaginations as they play solo or with friends. The perfect construction toys LEGO® NINJAGO® building toys for kids allow them to enter a world of adventure where they can team up with their ninja heroes to take on the forces of evil. NINJAGO fans will be enthralled as they role-play with these stunning ninja action toys, which include ninja cars, dragon models, temples, buildable figures and more.

• This building set includes a Cyber Dragon and 5 minifigures: NINJAGO® Digi Jay, Digi Nya, Unagami, Hausner and Richie. The Dragon Mech and buildable figures can be used to stage thrilling scenes from the TV series.
• This brilliantly detailed tech dragon has a posable head and limbsand can fire missiles from its spring-loaded shooters. The buildable figures all have health boards, and an exciting array of new armor and weapons from Prime Empire.
• This 518-piece LEGO® dragon and ninja action figures toy set is a fun and challenging build for boys and girls aged 8+ and makes a great birthday gift, Christmas present or LEGO gift for any occasion. NINJAGO® fans will be thrilled.
• New for January 2020, this Tech Dragon is the ideal size to play with at home or take out forfun on the go. The posable dragon measures over 4” (12cm) high, 15” (39cm) long and 12” (33 cm) wide.
• No batteries are required for this tech dragon – it is ready to go into battle in both Prime Empire and NINJAGO® city as soon as it is built, so you never need a timeout.
• This is the perfect LEGO® gift for a young builder. The bricks and buildable figures come with easy-to-follow instructions to quickly have your dragon toy ready for action.
• LEGO® NINJAGO® building toys for kids allow them to freely express themselves and dive into an exciting world of adventure where they can team up with their favorite ninja heroes for endless adventures against evil forces.
• LEGO® bricks have met the highest industry standards for more than 60 years, ensuring they are always consistent, compatible and pull apart with ease every time.
• The LEGO® bricks used to build this dragon model construction toy have been relentlessly tested and meet the highest global safety and quality standards.You know you are in safe hands when you choose a LEGO toy for your kids.