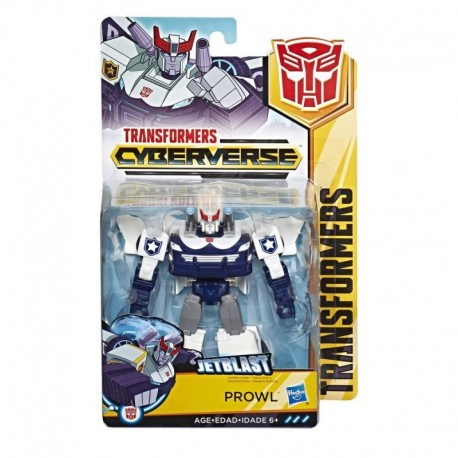 "Picture this: me, on Earth, still cooler than everyone this side of Optimus Prime, but I've got zero memories. Now I'm on a mission to recover my memories and discover all of my awesome powers. I'll have to battle Decepticons, outrun an explosion or two, and be heroic- basically, I'm in for one epic ride across the Cyberverse."
-- Bumblebee

• 2-IN-1 TOY: Easy conversion for kids ages 6 and up! Simply convert Prowl figure from robot to cop car mode in 9 steps. Please note that since Transformers toys are made for children, some parts are designed to detach if play gets too rough. That way, the pieces can be reattached without damaging the toy.

• G1-INSPIRED CLASSIC CYBERVERSE CHARACTER: White and blue Prowl toy designed to look like his classic police car alt mode. Inspired by the military strategist from the Transformers Cyberverse cartoon, as seen on Cartoon Network and YouTube.