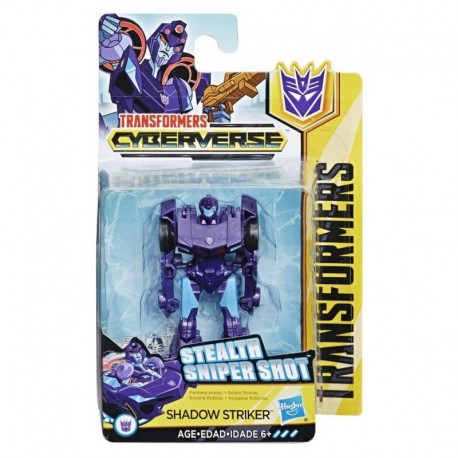 Picture this: me, on Earth, still cooler than everyone this side of Optimus Prime, but I've got zero memories. Now I'm on a mission to recover my memories and discover all of my awesome powers. I'll have to battle Decepticons, outrun an explosion or two, and be heroic- basically, I'm in for one epic ride across the Cyberverse."
-- Bumblebee

• 2-IN-1 TOY: Easy conversion kids ages 6 and up can do! Easily convert Shadow Striker toy from robot to car mode in 6 steps. Makes a great gift.

• CLASSIC CYBERVERSE CHARACTER: Purple and blue robot with signature red eye designed to look like the vengeful warrior from the Cyberverse cartoon.

• Warning: Choking Hazard - Small parts may be generated. Not for children under 3 years.