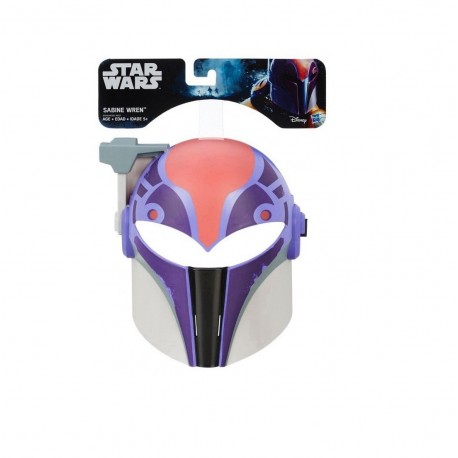 Enter the world of Star Wars and launch into action and adventure! Discover a galaxy of starships and vehicles, and get immersed in exciting stories of good versus evil against a backdrop of a universe populated by heroes, villains, droids, and space creatures with this Sabine Wren Mask from Star Wars Rebels!

A heroic Mandalorian warrior, weapons specialist and graffiti artist, Sabine Wren strikes down Imperial targets alongside her fellow crew members on the Ghost.

Put on this Sabine Wren mask to imagine joining the battle as the heroic Rebel fighter herself. With this authentically-detailed Sabine Wren mask, kids can imagine all kinds of the daring missions from Star Wars Rebels and the rest of the Star Wars universe.

May the Force be with you!

• WARNING: CHOKING HAZARD – Small parts may be generated. Not for children under 3 years. Ages 5 and up.