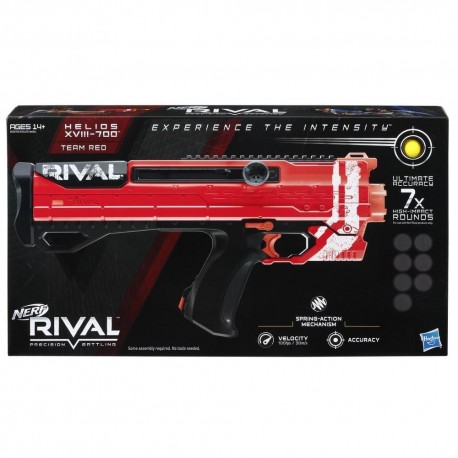 Pull back the bolt to prime the Helios XVIII-700 blaster and unleash rounds at a velocity of 100 feet per second (30 meters per second). The blaster has a spring-action mechanism and includes an easy-loading, 7-round magazine and 7 high-impact rounds. This Nerf Rival blaster also has a trigger lock to prevent the blaster from being fired accidentally, a ready indicator to show when the blaster is primed, and a tactical rail to customize with Nerf Rival gear and accessories (each sold separately). The bolt is removable so battlers can place it on either side of the blaster to customize for right-handed or left-handed battlers. Experience the intensity of Nerf Rival battles with the Helios XVIII-700 blaster!

Nerf and all related properties are trademarks of Hasbro.

• Includes: blaster, bolt, 7-round magazine, 7 rounds, and instructions.
• Experience the intensity of Nerf Rival battles with this bolt-action blaster
• Fires rounds at a velocity of 100 feet per second (30 meters per second)
• Comes with an easy-load 7-round magazine and 7 high-impact rounds
• Has a spring-action mechanism, trigger lock, tactical rail, and ready indicator
• Bolt can be adjusted for right- and left-handed battlers
• Ages 14 and up
• For use with Nerf Rival products only.