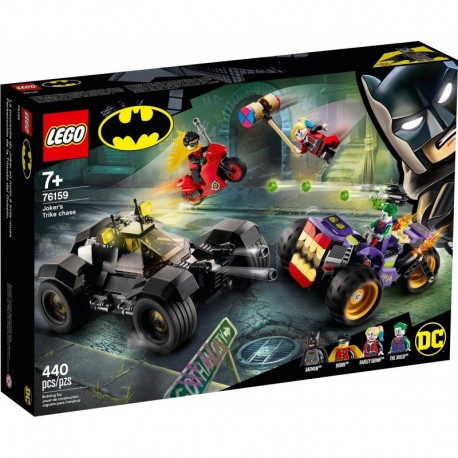 VROOOM! THE JOKER speeds through town on his monster 3-wheel trike. With cool weapons and flames coming from the exhaust, even his trike is laughing! But the awesome Batmobile soon catches up. Harley Quinn arrives, swinging a huge hammer, and Robin races to stop her on his motorcycle. But THE JOKER steals the Batmobile's engine and puts it in his trike! Will he escape? Only you can decide.

The LEGO DC Batman Joker's Trike Chase (76159) playset is a fast-moving Batman-vs.-THE JOKER gift for kids, featuring iconic cars, awesome weapons and favorite characters from the Batman movies. Hot Batman toys for cool kids Put Batman action and adventure into the hands of young super heroes with THE JOKER's monster 3-wheel trike toy, with its cool weapons and flames coming from the exhaust, and the ultra-cool Batmobile car. With Batman, Robin, THE JOKER and Harley Quinn minifigures, the pretend play starts right away. And with cool features, including the opening and closing mouth on the front of THE JOKERs trike and the removable Batmobile engine that also turbocharges the trike, the imaginative play will never end. Batman action with minifigures and construction toys LEGO DC Batman playsets bring all the thrills and epic fun of the Batman movies into kids' homes. Super-hero fans will have endless fun reliving favorite scenes and creating imaginative adventures of their own.

• The awesome LEGO DC Batman Joker's Trike (76159) puts fast-moving, Batman-vs.-THE JOKER action, iconic vehicles, awesome weapons and super-cool features into the hands of young Batman fans.
• Includes 4 minifigures and the Batmobile, with opening cockpit for the Batman minifigure and a removable engine. THE JOKER's 3-wheeler has a grinning mouth on the front that opens and closes as the trike moves.
• Kids develop skills as they enjoy endless hands-on play driving the souped-up vehicles, acting out battles with minifigures, cool weapons and accessories, and removing the Batmobiles engine to put in THE JOKERs trike.
• Looking for a top gift for kids whore into cars and toys from the Batman movies? Whether theyre a fan of DC Comics, RC cars or Batmobile toys, this LEGO Batman playset is an awesome gift for kids aged 7 and up.
• With the LEGO Batmobile toy measuring over 6 (16cm) long, this awesome playset is big enough for epic adventures and small enough for youngsters to enjoy lots of hands-on fun.
• This hot Batman toy doesnt need batteries to work just kids imaginations! Because the imaginative fun starts straight from the box, this LEGO playset makes a great birthday or holiday gift.
• Simple instructions are included so kids can build, play and get maximum enjoyment from every feature in this versatile playset.
• LEGO DC Batman playsets bring super-hero movie action into kids' homes. With amazing characters, vehicles, gadgets and weapons, fans can be part of the Batman movie action and create imaginative adventures of their own.
• All LEGO construction toys meet the highest industry standards to ensure they are consistent, compatible and connect and pull apart perfectly every time and it's been that way since 1958.
• LEGO bricks and pieces are dropped, heated, crushed, twisted and analyzed to ensure your child's new toy meets the highest safety and quality standards in the world.